Liver transplantation (LT) is the best option for patients with advanced cirrhosis, but its clinical application is often limited by the low availability of organ donors, risk of organ rejection, and implied high cost[1,2]. Consequently, the control and treatment of cirrhosis-associated complications remains the mainstay for this population. Malnutrition is a major complication often observed in patients with cirrhosis, and it has been associated with more severe disease, the manifestation of other cirrhosis-associated complications, and mortality[3]. Early diagnosis of malnutrition in patients with cirrhosis is important for prompt management and to improve quality of life[4–7].

In general, ascites, edema, and other chronic liver disease-associated complications (i.e., altered immunocompetence, decreased protein synthesis, and renal failure) can impair the performance of traditionally applied criteria for nutritional assessment (NA)[8]. Consequently, weight loss, anthropometric measurements, the creatinine-height index, nitrogen balance, lymphocyte count, and serum albumin, transferrin, prealbumin, and retinol-bound protein levels should be interpreted with restrictions when assessing the nutritional status of cirrhotic patients[9]. In this scenario, a gold standard NA method is required for the proper diagnosis of malnutrition in this patient population[10–15].

The phase angle (PA) obtained from bioimpedance analysis (BIA) has been proposed as a nutritional status marker, with low values associated with malnutrition and nutritional risk at the time of hospital admission[16]. The PA reflects the relationship between the resistance component (R), meaning tissue opposition to the passage of electric current, and reactance (Xc), meaning the resistance effect produced by the interface of tissues and cell membranes[17]. A main advantage of the use of PA is that it can be applied even under unstable tissue hydration conditions, such as edema and ascites[18].

By potentially reflecting malnutrition, the PA can be a useful prognostic marker in several clinical settings[16,18–29]. As with any biological marker, the PA is influenced by the specific characteristics of each clinical population and may vary according to sex and age. Thus, specific PA reference and cutoff values have been proposed to establish prognoses for different diseases[16,18–26,30–34]. Recently, the 4.9° PA value was identified as the best cut-off for malnutrition associated to disease severity of patients with liver cirrhosis and shown to have important prognostic value for malnutrition-associated mortality in this patient population[35].

In this study, we aimed to test whether this PA cutoff (≤ 4.9°) had prognostic value for mortality in a population of patients with cirrhosis of different ethnicity than used for its initial identification.

This study included 134 male patients with biopsy-proven cirrhosis who were recruited prospectively from the Digestive Tract Surgery Service at the Hospital das Clínicas of the University of São Paulo Medical School between January 2012 and December 2014. Exclusion criteria were alcohol abuse; human immunodeficiency virus positivity; cancer diagnosis, acute liver failure, or chronic or acute disease of the lung, kidney, or heart; previous LT; orthopedic prosthesis use; and dementia. All patients provided written informed consent before trial participation.

Our protocol was designed to determine whether the PA has prognostic value for mortality in male patients with cirrhosis, by considering the PA cutoff point proposed by Ruiz-Margáina et al[35] (PA ≤ 4.9°) as a malnutrition marker. All recruited subjects were instructed to refrain from excessive physical activity, diuretic use, and alcohol consumption for 24 h before the assessment, which was performed in a 4-h fasting state[36]. Demographic data were recorded for all subjects. Death events were recorded for all patients with cirrhosis during the 36-mo follow-up period. A single trained technician performed all study procedures according to the ethical standards of the Declaration of Helsinki of the World Medical Association. All procedures were approved by the Institutional Ethics Review Board (0646/11) and registered at https://www.clinicaltrials.gov/ (NCT02421848).

The PA was assessed by whole-body BIA[40] at 50 kHz (Bodystat 4000 model; Bodystat Ltd., Douglas, Isle of Man, British Isles) with APEX software (version 4.02; Hologic Inc., Bedford, MA, United States). Participants removed all metal objects and other items that might interfere with the scan and were instructed to empty the bladder. Each participant was positioned supine in the center of the scanning table with the palms down and the arms beside the body. His age, height, weight, sex, and ethnicity were entered into the computer. The PA value was calculated as PA = arc tangent Xc/R × 180/π. Patients were grouped according to PA value (PA > 4.9°, PA ≤ 4.9°)[35].

Death events were assessed by telephone calls at the end of the study period. Only deaths related directly to cirrhosis complications were counted. The prognostic value of the PA for mortality prediction was evaluated in mortality models adjusted for variables potentially impacting nutritional status and/or cirrhosis severity (age, Child-Pugh and MELD score)[35,41,42]. A longitudinal analysis of mortality was used to assess the prognostic value of malnutrition.

The sample size required to analyze the prognostic value of the PA for mortality was calculated using the G Power software package (version 3.1.9.2; Heinrich Heine University, Dusseldorf, Germany). A sample size of 134 patients was obtained from a Cox proportional-hazards regression model, considering a significance level of 5% and rate of 36% at 36 mo of follow-up, with 80% power to detect a hazard ratio (HR) of 2.50 for mortality prediction.

Survival probabilities were estimated by the Kaplan-Meier method, compared using the log-rank test, and estimated in terms of the failure rate according to independent and multiple models of Cox proportional hazards. The mortality models included PA values and were adjusted for MELD score and age. Data were expressed as means ± SDs, medians, interquartile ranges (IQRs; 25th-75th percentile), or percentages, depending on the normality of distribution and type of variable. Data were analyzed using the R software package (version 3.1.3, 2015; R Core Team, Vienna, Austria) and a significance level of 5%.

Prognostic value of malnutrition, identified by the phase angle

The Child-Pugh score had no significant effect in the initial mortality model and was not included in the final model (Table 2). PA values ≤ 4.9° significantly affected the mortality model adjusted for MELD score and age (HR = 2.05, 95%CI: 1.11-3.77, P = 0.021). In addition, the mortality prediction was not influenced by MELD or age. Patients from the PA ≤ 4.9° group were significantly more likely to die, as demonstrated by Kaplan-Meier curves (Figure 1). In the median follow-up period of 18 mo, the incidence ratios of death were 27.10% for patients from the PA ≤ 4.9° group and 9.90% for those from the PA > 4.9° group. 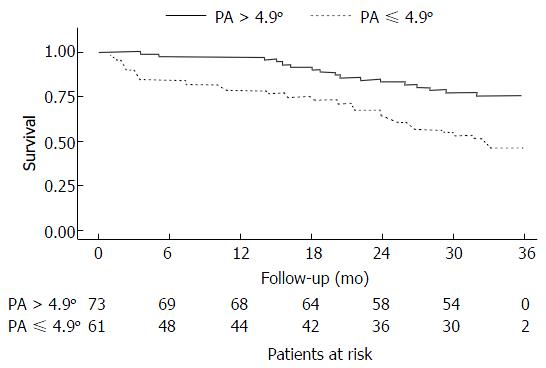 Although malnutrition implies a poor prognosis for patients with cirrhosis, its diagnosis has been masked in this population due to the unavailability of a clinically accessible method that is not affected by edema and/or ascites[18]. The PA is not affected by hydric changes and was recently proposed as a good tool for malnutrition diagnosis in patients with cirrhosis, with a cutoff value of ≤ 4.9°[35]. Here, we showed that PA ≤ 4.9° predicted mortality in male cirrhotic patients, in a model adjusted for age and MELD score.

We identified four studies evaluating the prognostic value of the PA in Brazilian (n = 2), German, and, more recently, Mexican patients with cirrhosis. These studies showed that PA cutoff values of 5.18°, 5.44°, 5.4° and 4.9°, respectively, were related to disease severity and even mortality, when controlling for age and other nutritional variables[14,18,35,43]. Here, we applied the PA cutoff value proposed recently by Ruiz-Margáin et al[35] (≤ 4.9°), which was further used to establish malnutrition with good prognostic value for mortality in a cohort of Mexican cirrhotic patients.

In our study, the prognostic value of this PA cutoff was tested in mortality models adjusted for age and MELD score, as the main markers of PA performance and disease severity, respectively. Age has been proposed as the main indicator for PA determination in women and men, and the MELD score has been considered a good predictor of short-term mortality in patients with cirrhosis[35,41,42].

The Child-Pugh score was added to our initial mortality model because it may reflect the progression of liver damage and indirectly detect metabolic changes that may influence the prognosis of the disease[42]. However, it had no significant effect on mortality prediction. Notably, the MELD score has been validated as a good predictor of the survival of adult patients on the LT list, and has been found to better predict short-term results than does the CP score[44]. This difference in performance may explain the significant value of the MELD score, and not the CP score, for mortality prediction in our initial model. Data from the final mortality model support the prognostic value of PA ≤ 4.9°, as it was associated independently with mortality. Furthermore, our HR for mortality was similar to that reported by Ruiz-Margáin et al[35].

Results from some studies suggest that malnutrition is related strongly to mortality and cirrhosis-related complications[14,18,27,35,43,44]. Despite evidence suggesting the utility of the PA as a nutritional marker, its validity has been questioned. According to our data, the PA ≤ 4.9° cutoff was able to identify patients with significant changes in inflammatory and nutritional markers highly indicative of catabolism and malnutrition (i.e., increased IL-6/IL-10 ratio and CRP level and decreased albumin level and HGS, a relevant marker of muscle loss associated largely with poor prognosis in cirrhosis). The notably increased mortality rate observed in our patients with PAs ≤ 4.9° may be associated closely with the deleterious effects of malnutrition.

PA values change in response to nutritional interventions, with greater sensitivity than achieved with other nutritional markers[45]. Thus, even if the PA cannot actually represent the nutritional status of a patient, it seems to adequately reflect minimal changes in this clinical variable. In this scenario, the PA could be applied for nutritional monitoring of patients for whom the risk of malnutrition could significantly influence clinical outcomes. For instance, the incidences of severe ascites and encephalopathy complications were significantly higher among patients with PAs ≤ 4.9° than among those with PAs above this cutoff in our study, in response to the metabolic consequences of the disease.

Patients with cirrhosis often display circulatory dysfunction with portal hypertension, leading to vasodilatation of splanchnic vessels and favoring decreased peripheral resistance and effective central blood volume, with consequent arterial hypotension and hyperdynamic circulation. These abnormalities result in the activation of vasoconstrictor systems through the renin-angiotensin-aldosterone system and of the sympathetic nervous system, with increased levels of antidiuretic hormone and renal vasoconstriction that culminate in ascites and/or edema[46]. These altered physiological states limit the application of available methods to evaluate nutritional status[47].

Indeed, as a result of ascites and/or edema, anthropometric measures such as BMI usually overestimate lean mass in patients with end-stage liver disease who require LT[3]. Consequently, although easier, traditional NA may underestimate the prevalence and severity of malnutrition in patients with cirrhosis[13]. Moreover, the presence of body fluid changes, mainly ascites, may explain the marked discrepancies in malnutrition frequencies (ranging from 5.4% to 68.2%) among NA methods in patients with cirrhosis[12,47–54]. As PA values are not influenced by unstable hydration, we suggest that this tool is useful for nutritional monitoring of patients with cirrhosis, and that the PA cutoff value proposed by Ruiz-Margáina et al[35] can identify those at high risk of death if not nutritionally treated.

One limitation of our study was the inclusion of solely male patients. We assessed only male patients to make our sample as uniform as possible, as liver cirrhosis per se is a progressive disease and hepatic damage may differ, even slightly, among patients. In addition, cirrhosis is more common in men and malnutrition seems to have greater prognostic value for disease progression in men than in women. The prognostic ability of the studied cutoff value for phase angle is associated directly with malnutrition. Thus, by evaluating only men, we were able to access not only a more uniform sample, but also the population most susceptible to the studied disease and its associated nutritional complications. Ruiz-Margáin et al[35] did not specify the sex of the cirrhotic patients with which the studied PA cutoff value was developed. Thus, we cannot confirm whether this value performs similarly in the prediction of malnutrition-associated mortality in women. We can conclude that the PA ≤ 4.9° cutoff was associated independently with mortality in male patients with cirrhosis, potentially associated to malnutrition. The PA may be a useful and reliable bedside tool to evaluate prognosis in cirrhosis.


Warning: call_user_func_array() expects parameter 1 to be a valid callback, class 'WordPress\Plugin\GalleryManager\Mocking_Bird' does not have a method 'printLighboxBranding' in /home/cirurgiaowelling/public_html/wp-includes/class-wp-hook.php on line 287